This blog documents my ongoing research to establish the origins of   Arthur/George/William Courtenay/Courtney   my mothers paternal great grandfather.  I first started seriously researching my Courtenay/Courtney line with traditional research in about 2006 and explored many possible theories as to his identity.  In late 2010 I undertook DNA testing expecting my primary theory to be immediately confirmed.   I'm still searching... . For an overview of my research relating to George, please go to the  Research Summary . For more information about all my family research, please check out my  Genemonkey Website . It is an ongoing 'works in progress'.  Please contact me if you can help, via the form at the bottom of this page. Featured image: By Richard Rixon, 1841 – Saint, A., Guillery, P. (ed.), Woolwich – Survey of London, Volume 48, p. 60. Yale Books, London, 2012. ISBN 978 0 300 18722 9,  Public Domain .
Read more

Is Michael James Courtney of Iowa associated with my Courtney family?

Last year my first cousin tested for me at AncestryDNA, her father was my mothers brother, another great grandson of our missing George Courtney.  He had tested for me at other DNA sites but was not on AncestryDNA having died before being able to test there.  I lived in hope that my cousins results might give some additional clues given the extensive database at AncestryDNA compared to other sites. When her results came though I quickly analysed them and using her closest matches allocated them to her four grandparent groups. Through this process I came up with three additional ‘unknown’ groups.  It was impossible to tell which side they belonged to so I researched all three to see if I could find any genealogical connections within each group for clues. One group (U2) held particular interest as I found that several members of the group shared the ancestry of Michael James Courtney born c1865 in Bluffton, Winneshiek, Iowa and his wife Anna Agnes O’Brien also born in Iowa in abt 1868.
Post a Comment
Read more

After establishing that we may have some Romany DNA I started looking into how to research in this area in particular from a DNA point of view.  Three key sites of interest included:- The Romany and Traveller Family HistorySociety - joined FTDNA RomanyDNA Project - quite restrictive on who joins FTDNA Celtic Travellers - joined  I also created a resource page at Wikitree - British Romany Resources . It was on the Celtic Travellers site that I found a reference to a list of known surnames.  The Traveller Tinker Gypsy Surname Index of Great Britain  last updated 8/03/2010.  Under the name COURTNEY, two suggestions.  1841 Census St Austell, Cornwall and 1851 Census Scotland.  How these names came to be on this list are unclear.  Needless to say, I've now researched these families to see if they connect to any other Courtney's that have been subjects of interest in the past. 1841 St Austell - Nicholas COURTENAY The reference to the 1841 was actually to a family listed under the
Post a Comment
Read more

Could George be of Romany descent? 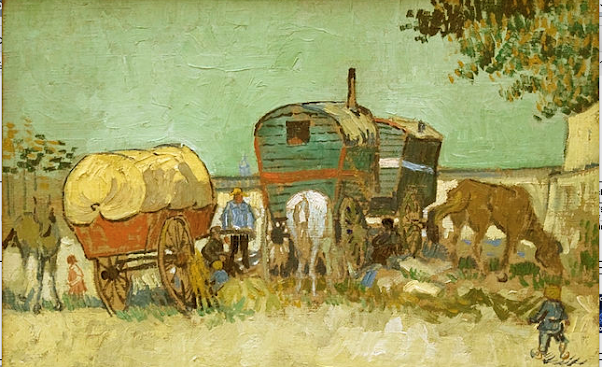 NOTE: This post is just a teaser!  I need to document more of the genetic evidence, but this is being written as part of the SAG DNA Blogging Group, so here goes the story so far.... ***** Continuing with my DNA analysis looking for the origins of my maternal 2nd great grandfather - Arthur/George/William Courtney/Courtenay. Many years ago now I discovered my mother had a large X match at GEDmatch with a female from England, it was two segments, totalling approx 92cMs.  This was a very big match and generally a sign of a close relationship.  However, the X chromosome can behave differently to the other autosomes and the relationship could be more distant than it seems. I attempted to contact the match back in 2018 and had no reply.   In 2019, I turned to Facebook sleuthing as she had an unusual surname.  I sent messages to people with that name in England asking if they had tested and could they be the person I matched?  I had a reply from one of them saying, yes it was her but she was
Read more

Walking Back the Clusters, 2020 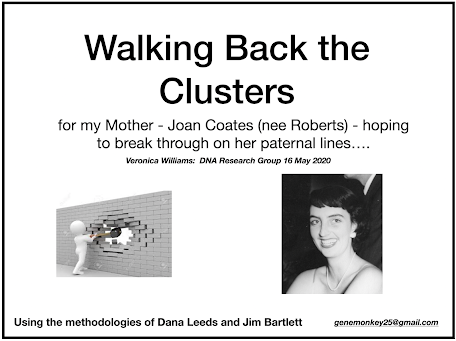 In 2020, Jim Barlett posted on his segment-ology blog, a process using cluster analysis designed to tease out family groups from shared matches.  You can read about it here .  It was based on the Leeds method, a methodology developed by Dana Leeds that you can read here . I was inspired to apply the process to my mothers results from AncestryDNA in the hope that it might assist me with drawing conclusions about her paternal line.  I used the application of the process as an opportunity to also run a webinar session on my outcomes.  The session was developed for the DNA Research Group at the Society of Genealogists and can be viewed on You Tube . At the end of the process, I had 71 clusters, consisting of: 43 clusters - Maternal side 61% 20 clusters - Paternal side 28% 8 clusters - Unidentified 11% - Priority Of the paternal clusters: 2 clusters - Unclear if connected via Edward Roberts or Abigail Courtney - Priority 5 clusters - Connected via Edward Roberts b1869 7 clusters - Connecte
Read more 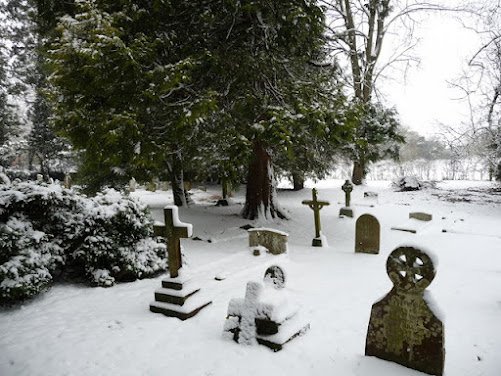 I have long been fascinated with the village of Barton Stacey and whether it holds the key to unlocking the mystery of my mysterious Mr Courtney.   Very early on in my research I discovered an Elizabeth COURTNEY , the wife of William BOUND of Barton Stacey who had connections to the PAICE and JOYCE families.   As it turns out some time later I found she was a descendant of William Courtney, gentleman, who had been involved in the Swing Riots of 1830 .  Some of Williams descendants had the middle name Hinxman, a quite unusual name.  However it is also a family name in my Paice family, Thomas HINXMAN being the second great grandfather of Abigail Paice the wife of the mysterious Arthur George Courtney.  Many years later a group of unknown DNA matches connected to the Australian convict Silas COLE from Barton Stacey also emerged.  It would seem these matches are somehow connected to our Paice family from Kingsclere Hampshire.  You can read some of my preliminary findings in my blogpost h
Read more

Recreating the genome of Abigail Courtney b1871 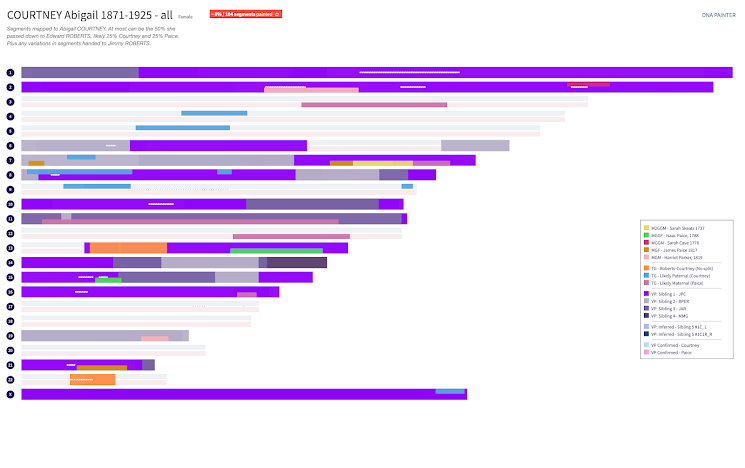 The best chance we have of finding George is to identify the specific segments of DNA his descendants have inherited from him. Abigail Roberts (nee Courtney) c1912 The only known descendant of George is his daughter Abigail Courtney, she married Edward Roberts in 1891.    Abigail had two sisters, Edith and Alberta.  Edith however is only a half sibling sharing their mother Abigail Paice, so no Courtney DNA there.  It is unknown what happened to Alberta, she was Abigails twin and alive and well in the 1871 census at 3 months old.  However, there is no record of her in any subsequent census, nor can I find a death record.   Abigail, George and Alberta are all missing from the 1881 England census so we cannot be sure if she was with them at that time.  I have concluded Alberta probably died young and the death was not registered even though it would have been a requirement at that time We can currently seek to identify up to a maximum of 25% of George Courtney's DNA inherited by his
Read more 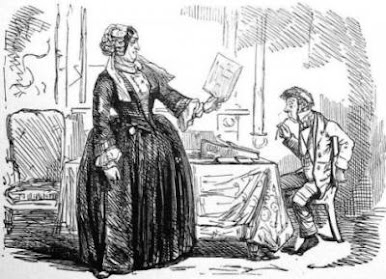 I got hooked on Family History in about 2006 and took my first DNA test in 2010 quickly becoming addicted. I was instrumental in the establishment of the DNA Research Group at the Society of Australian Genealogists, was the convenor from 2015-2021 and remain an active member. I am an administrator for a range of projects at Family Tree DNA, am on the Executive for the Cassidy Clan and am a co-leader of the Australia Project at Wikitree.